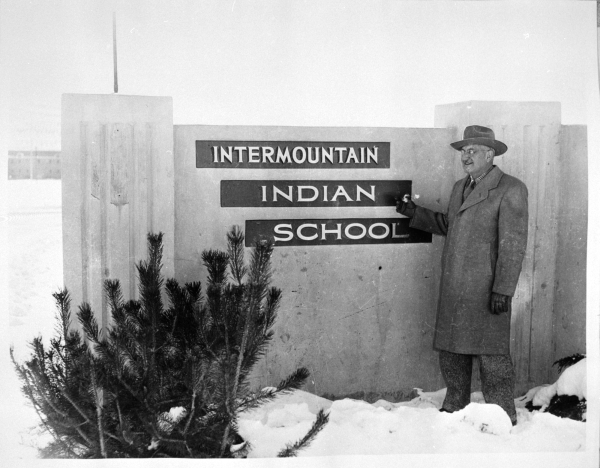 Dr. Boyce standing in front of the IIS sign.

In examining the possibilities for a Brigham City Indian school, a delegation including community and educational leaders visited the Reservation to learn more about Navajo educational needs and gage interest in a Navajo boarding school. A similar group of Navajo Tribal Leaders visited Brigham City to get a feel for the town.

As plans moved forward, some religious groups became wary of the project, fearing it was “only a veiled scheme to make little Mormons out of Navajo children.” To calm these concerns LDS President George Albert Smith assured other ministers in town that this was not the goal, and also agreed not to seek the chapel on campus, but to allow other demonimations free access to it.

On June 3, 1949 a meeting was held at the Brigham City Tabernacle to introduce the project and convince people of its value. The speakers were Dr. John P. Nichols, US Commissioner of Indian Affairs, Senator Watkins, Dr. Boyce, and President Smith. People from all over Northern Utah were invited, including mayors, civic groups, ecclesiastical leaders, and the public. 700 people attended. Ralph Kent Rich summed up the meeting thus: “The meeting broke the barriers of fear and ignorance and created a fealing of excitement and anticipation.”