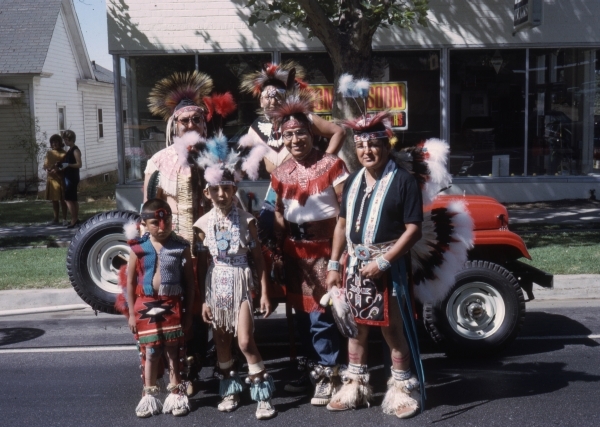 Students and staff from IIS participating in a Peach Days Parade, c. 1980. Brigham City residents looked forward to their involvement in the annual festival. Photo by Arlie Pittman.

Despite attempts to close the school in the 70's, the school remained open until 1984.

After the turmoil of the early 1970s had settled, enrollment was high. But the Reagan budget-cutting era erupted in 1980. In 1981, the Bureau of Indian Affairs recommended that Intermountain be closed to save costs. It wasn't until 1984 that the school was deemed too expensive and no longer necessary.

Others had expressed that the reason for closure was due to the golf course wanting to expand its holes, children were loosing their Native heritage, trouble making payroll because of decreasing federal funding, inadequate and decaying buildings and dorms, and empty reservation schools.

During the last four years of operation, Congress forbade Intermountain to enroll more than 500 students. At the time of closure, IIS had a waiting list of 1,500 students.

There were mixed feelings toward the closure of the school. Many who had taught, worked, or grew up at the school were sad and disappointed that the school could not remain open. Many had grown attached to the students and school. The economy of Brigham City also suffered with the closure of IIS.

“The economic impact [of the school’s closure] will eventually be adjusted. In closing the school, the government is closing a chapter in Indian history. Looking back, people will see that we, in Brigham City, played an important role.”
- Peter Knudson, Mayor of Brigham City at time of closure.