Was the Transcontinental Railroad Responsible for the Destruction of the Bison in Utah? 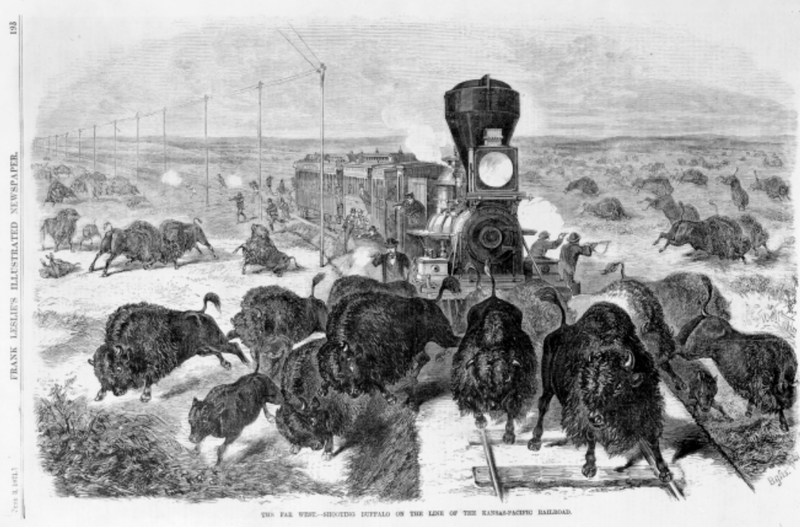 The Far West - shooting buffalo on the line of the Kansas-Pacific Railroad, 1871.

Classic illustrations depict people firing rifles at bison as their train travels across the prairie. Westward migration encouraged the slaughter of bison to make way for the railroad and to eliminate a major food source of many Native American tribes to starve them into submission. The demand for bison remains for use in fertilizer and other goods in the East also increased once the railroad could ship carcasses.

On closer inspection, however, these images depict other railroads, and are later, sometimes quite a bit after 1869. In Utah, only an occasional bison was seen after 1840.

Historically, bison ranged throughout Utah, and the area around Willard Bay may have been the most heavily populated.

“The country we travelled over this day [between Great Salt Lake, and the Malad River] is covered with cedar trees, and from the quantity of buffalo dung and tracks in the spring of the year must be most abundant, at present no signs of any. . . As we were on the the eve of encamping we were rather surprised to see our guide coming in advance with a cheerful countenance and informed us he had seen an indian who reported to him that buffalo were not far off, at the same time not numerous.”

Journals of white settlers and oral histories of American Indian populations are valuable resources for historians studying this topic, although they leave the situation a bit murky. Some reports say Utah's bison were exterminated by unusally heavy snowfall in the 1840s, or 1820, or 1837, or another year in that period. Some scholars point to acquisition of guns and horses by Utah's Indian tribes, and the coming of trappers as the keys to the destruction of a bison population that was never very large.