Were Chinese and Irish Workers Blowing Each Other up as They Approached Promontory? 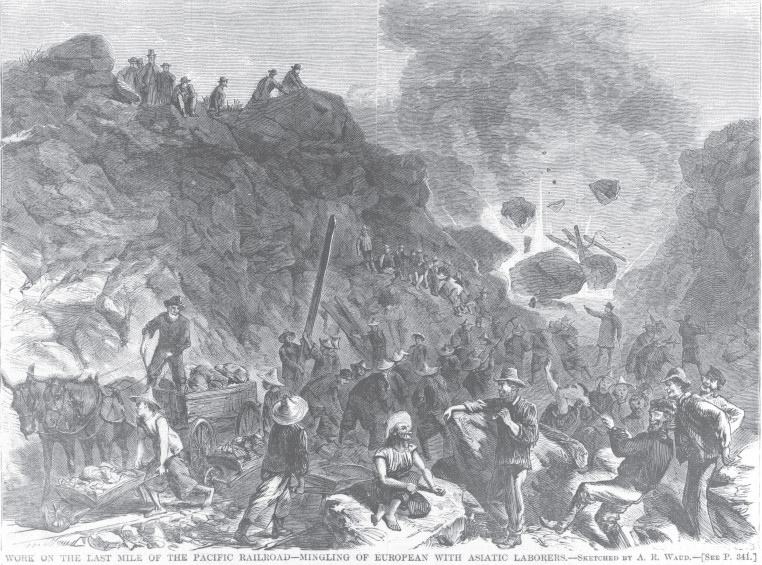 “Work on the last mile of the Pacific Railroad -- Mingling of European with Asiatic laborers,” sketched by A. R. Waud, 1869.

“Between Ogden and Promontory each company graded a line, running side by side, and in some places one line was right above the other. The laborers upon the Central Pacific were Chinamen, while ours were Irishmen, and there was much ill feeling between them. Our Irishman were in the habit of firing their blasts in the cuts without giving warning to the Chinamen on the Central Pacific working right above them.  From this cause several Chinamen were severely hurt. Complaint was made to me by the Central Pacific people, and I endeavored to have the contractors bring all hostilities to a close, but for some reason or other, they failed to do so. One day the Chinamen, appreciating the situation, put in what is called a "grave" on their work, and when the Irishmen right under them were all at work let go their blast and buried several of our men. This brought about a truce at once. From that time the Irish laborers showed due respect for the Chinamen, and there was no further trouble.” —Grenville Dodge, 1911

Contention between immigrants of different nationalities is easy to find in the historic record, as immigrants struggled to find their place in the United States. Yet the evidence suggests this tale, told long after the fact, never happened.

← Were Chinese Transcontinental Railroad Workers Abandoned After the Road was Done?
Did Steamboats go up the Bear River, Past Corinne? →
Were Chinese and Irish Workers Blowing Each Other up as They Approached Promontory?